With all that had been going on over the past few months I’ve virtually stopped eating as I was coping perfectly OK on my fortisips through my PEG and it was as much about the convenience of this rather than any discomfort eating caused.

I hadn’t started any lymphatic treatment yet as I had to be infection free before they could start.

My Consultant had seen the results from my previous swabs, come to the conclusion that the anti-biotics I were having weren’t doing a great deal so suggested I go in for another operation to have what’s called a pack put in.

I agreed to this, he made an appointment which came through quickly and was to be on Tuesday 18th December 2018

I actually had to go in to hospital on the Monday evening, it wasn’t even a proper ward more of a pre-op ward and nowhere near as nice as my previous wards

Had the usual instructions, no earing or drinking after 10, get myself nice and clean in the morning then given a robe and having to wait

I can’t remember anything about the operation other than waking up on another ward with no pain, but my neck bandaged up
I saw Mr Walton the next day, he said everything had gone well.

I said, does this mean I’m going to be in hospital for Christmas and he said no I would be discharged the next day 2oth December and would be home for Christmas 🙂

It was a long old day, the 20th as I had to wait for prescriptions to be made up, wait to see Mr Walton again, wait to be signed out, etc.

Mr Walton explained the operation and what a Pack was,

He had basically opened me up a again with just a small hole, cleared out some gunk and then put in a roll of gauze like material which was soaked in a special substance which apparently come from the Amazon rainforest and is 10 times more effective than anti biotics.

He also explained that I had to go in every week where a nurse would slowly pull a bit of the gauze pack out week by week and the wound naturally heal from the inside out.

After being given all the info, the following weeks appointment made, my prescriptions ready I was eventually discharged at about 4:00 on Thursday 20th December giving me plenty of time to get a Christmas Tree and a turkey and all the trimmings for a proper Christmas Dinner – A Christmas that a few times in the previous months I didn’t think I would see 🙂 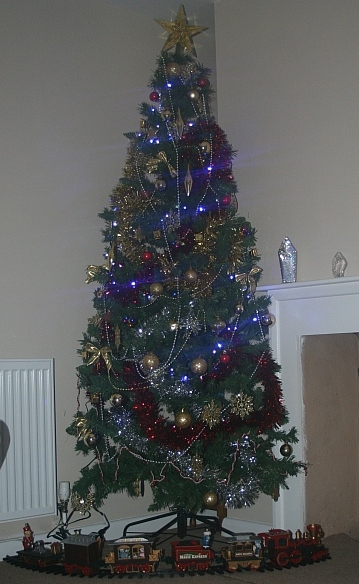