Back at home, the calm before the storm

It was now 6 weeks since having an operation to remove half my lower jaw due to cancer (T4 N1 squamous cell carcinoma of the right mandible) and I was back at my parents home.

I hadn’t seen or even spoken to my wife and children since the day before I went in to hospital as I didn’t want them seeing me in the condition I was. 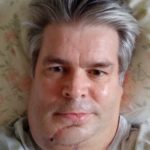 I wasn’t too badly scarred, but my face was still like a balloon due to the swelling, my consultant told me it would go down, but could be months rather than weeks.

The spare room at my mums had been redecorated and had new carpets due to my mass bleeding on my previous release from hospital, my mum had also set me up a desk for my laptop, a bedside lamp and an even bigger bell than last time 🙂

I was still having the dressing on my leg changed twice a week but the district nurse said I would get no more home visits and I had to make my own way to the surgery in Stratford to get it changed from now on, I also had a couple more sessions of physio and was walking regularly.

I was feeling really good, walking down the canal at least a couple of times a day, walking in to Stratford. I was eating a lot more now so was only on 2 fotisips a day and my weight had steadied off at about 12 stone, over 4 stone lighter than the start of the year – everything was looking rosy 🙂

After about 2 weeks of being at my parents Paul came round and started talking about me going home.
I had been putting it off, he knew this and said you can’t put it off forever, so I decided there and then I would go home and see my wife and children.

I made myself look as good as I could, jumped in his car and we drove to Honington.

We pulled in my drive, Paul just sat there as I got out of the car and after just a few paces the front door flew open and there was my daughter.

It was a day I’ll never forget, like the scene from The Railway Children when Father gets of the train and Bobbie shrieks “Daddy, it’s my daddy”

Paul just left us to it whilst we went in and saw my son and then followed in 5 minutes later.

We stopped for an hour but I said I would be over again Saturday morning and stay for the weekend.

The weekend was great, I was really mollycoddled, even tiger slept on my bed.

When we got back to my mums, I opened my post (had given the hospital my mums address) and there was the letter telling me when my radiotherapy and chemo sessions would begin.

It was to be 33 sessions of radiotherapy , 5 days a week for 6 1/2 weeks plus 3 sessions of Chemo therapy which consisted of all day visits to the chemo ward – All starting on the following Monday!